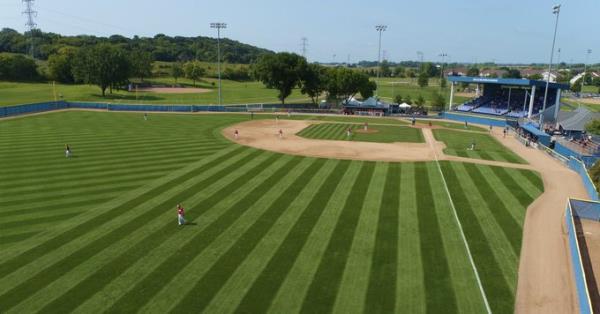 Great Pitching and Consistent Hitting for the LoGators

Victoria started its night in the top of 1st inning with a double for Cole Sweeney to deep left field just out of reach for the LoGators. That was all the action they would get early, as Sweeney advanced on sac fly from Jon Leighton to third, but he was left stranded.

For the LoGators, they got their bats going early in the bottom of the first. It started when Ryan Bruns reached first on an error, and then the hits started coming. Matt Marek got a single that advanced Bruns to second but it was Ethan Mocchi that singled that the Vics' left fielder misplayed that scored Bruns and a close play at the plate that came in safe for Matt Marek, putting the boys from Champlin Park up 2-0 through the first.

Victoria's Matt Dolan made a great read on the baseball and took another single away from the Logators with his diving stop right before a Reid Conlee strikeout to end the inning of big bats for the LoGators.

In the bottom of the third inning, after the third error by Vics that advanced the speedy Bryce Nelson to third base, Dylan Wilson hit a sac fly to score Nelson, making it a 3-0 lead for the Locators. Pitcher Riley Sweeney started to struggle, walking Jack Puder and getting Ryan Bruns (hit by the pitch) on base too.

To start the bottom of the third inning, the LoGators continued to cruise. Moochi started it up with a single, and with a Jeff Heuer walk, Jon Koenig singled to load the bases. A hit was not needed for Champlin Park to score, as Riley Sweeney threw a wild pitch scoring Mocchi to give the LoGators a 4-0 lead. They weren't done with one run, as Bryce Nelson connected with a double after a Vics pitching change and the LoGators led 6-0. With more ducks in scoring position, Jack Puder hit a single and scored Bryce Nelson. A wild throw on a steal to second base gave the LoGators another run to make it 8-0.

Matt Dolan got the bats going for the Vics, doubling to left-center field, and it didn't end there when a Trey Cavello single scored Dolan to get the Vics their first run of the ball game.

In the bottom of the fourth, the LoGators got going again. With Jeff Heuer doubling, Jon Koenig getting walked, and Bryce Nelson singling, the LoGators had the bases loaded for the second time tonight and cashed in on two seeing-eye singles giving them three more runs in the fourth with only one out giving them a 12-1 lead.

The top of the seventh inning, after a Trey Cavello single, to start the inning, Hunter Even hit a lazy fly ball that was dropped by the LoGators right fielder and got the Vics their second run of the game. It wasn't enough as the LoGators were able to 10-run rule the Vics winning by the final score of 12-2 to end the seventh

Champlin Park will play next Saturday at 1 p.m. versus Coon Rapids or Miesville, who will play tomorrow at Shakopee.