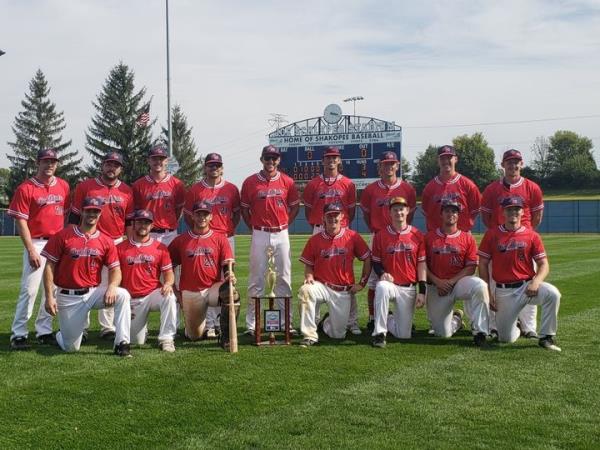 Thrice as nice: Chanhassen begins first team to win three championships in a row since 1940s
Posted on Sep 07, 2020

With two out and nobody on in the bottom of the eighth Sunday afternoon, it looked like there would be a second game to determine the champion at Joe Schleper Stadium in Shakopee. But it was not to be! Brandon Arnold’s two-run shot in the bottom of the eighth inning lifted the Chanhassen Red Birds from one run down to give them a 4-3 victory over the Moorhead Brewers and a three-peat as Minnesota Class B State Champions.

Chris Choles got the win for two scoreless innings in relief. Miles Nablo pitched a 1-2-3 ninth inning for the save.

Moorhead starter Cole Christensen had retired 14 Red Bird hitters in a row when left-hander Nick Smith stepped to the plate with two out in the bottom of the eighth inning. He swatted the first pitch from the Brewers righty into the left-center field gap for a double. After a ball and a strike, Arnold got a hanger and hit it over the left field fence to give Chanhassen a lead they would not relinquish.

“It was a hanging curveball,” Arnold said after the game. “He’d been throwing me a lot of curves, so I was sitting on that.”

Moorhead grabbed the early lead in the top of the second inning. Cleanup hitter Joe Hallock reached on an error by Arnold at short and reached second on a sac bunt attempt that Tanner Adam legged out for a single. Mike Peschel then executed the sacrifice bunt, moving both runners up. Hallock scored on a Brandt Kolpack groundout to short.

The Red Birds took over the lead in the bottom of the fourth. Michael Jurgella reached on an error and Zack Hoffmann doubled him in with a shot that went over the head of center fielder Spencer Flaten. Hoffmann took third on a fly out by Ben Livorsi and scored on a groundout by Aaron Kloeppner. That put the Red Birds ahead 2-1.

The Brewers knotted it up in the sixth. Jayse McLean drew a leadoff walk and scored on a double by Denver Blinn over the head of left fielder Aaron Pfaff. Chanhassen starter Thomas Thompson set the side down in order after that outburst.

The Brewers wasted no time getting the lead back, scoring a run on three hits in the top of the seventh. Catcher Chandler Ibach hit a one-out double to left. Thompson induced a popup to first from Nick Salentine for the second out. Then Flaten hit one back up the middle to plate Ibach and give the Brewers a 3-2 lead. That hit chased Thompson, who was replaced on the mound by Choles. The Chanhassen southpaw gave up a single to Jayse McLean before getting Denver Blinn to pop one up for the third out.

Choles gave up two more hits in the eighth, but was bailed out on a 6-4-3 double play to end the inning. Dablo struck out two of the three batters he faced in the 1-2-3 ninth to earn his third save of the tournament. Center fielder Nick Smith made a diving catch for the second out of the inning.

Christensen pitched a gem, giving up four runs (three earned) on five hits over eight innings. He struck out five without walking anyone, throwing a total of 85 pitches. As good teams do, though, the Red Birds made Moorhead pay for the only error they committed, the unearned run in the fourth.

Thompson allowed three runs (two earned) on six hits with no walks in 6-⅔ innings. He hit one batter.

Four of Chanhassen’s five hits went for extra bases. Jurgella, Hoffmann and Smith all hit doubles, and of course, the home run. Aaron Kloeppner hit the only single and he was erased on an infield double play in the second inning.

Moorhead amassed nine hits. Flaten had two of them (2-for-5). No one else had more than one. The Brewers left seven runners on base, including Blinn on third with one out in the sixth.

Had Moorhead won, they’d likely have been up against John Straka, the Red Birds ace, who was named tournament MVP. He notched tournament wins against St. Michael, Northfield, and Moorhead (on Friday). He struck out 27 in his 22 innings, putting up a 2.74 ERA.

Asked how this title compared with the previous two, Arnold, the Red Birds’ player-manager, said they’re all sweet … “that’s why we play.” ..s but that this one might be better because, unlike the first two, it came on the day before Labor Day instead of on the holiday itself, meaning the players get an extra day to celebrate.

The Red Birds’ on-field celebration upon recording the final out appeared a bit subdued, as one would expect in the midst of a coronavirus pandemic, but the fact that it came during such a historic time might just make it an extra-memorable one. Rattling off 25 straight wins won’t hurt, either. Arnold said the team lost its second game of the season. They finished 27-1.